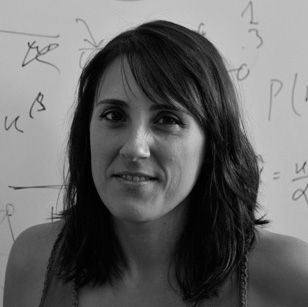 Prof. Serrano obtained her Ph.D. in Physics at UB in 1999 with a thesis about gravitational wave detection. One year later, she also received her Masters in Mathematics for Finance at the CRM-Universitat Autònoma de Barcelona. After four years in the private sector as IT consultant and mutual fund manager, Prof. Serrano returned to academia in 2004. She worked as a postdoc at Indiana University (USA), the École Polytechnique Fédérale de Lausanne (Switzerland), and IFISC Institute (Spain). In 2009 she was appointed to a Ramón y Cajal Fellowship at UB. The results of her research are summarized in major peer reviewed international scientific journals -including Nature, PNAS, and PRL-, book chapters, and conference proceedings. She leads and participates in several ongoing research projects at the international and national levels. She is also actively involved in teaching, and in advising and research supervision of graduate and undergraduate students. She serves as a member of different evaluation and program scientific committees, and as a reviewer in several international journals. In February 2009, she obtained the Outstanding Referee award of the American Physical Society. She is a Founder Member of the Complexity Lab Barcelona at UB and of Complexitat, the Catalan Network for the study of Complex Systems.